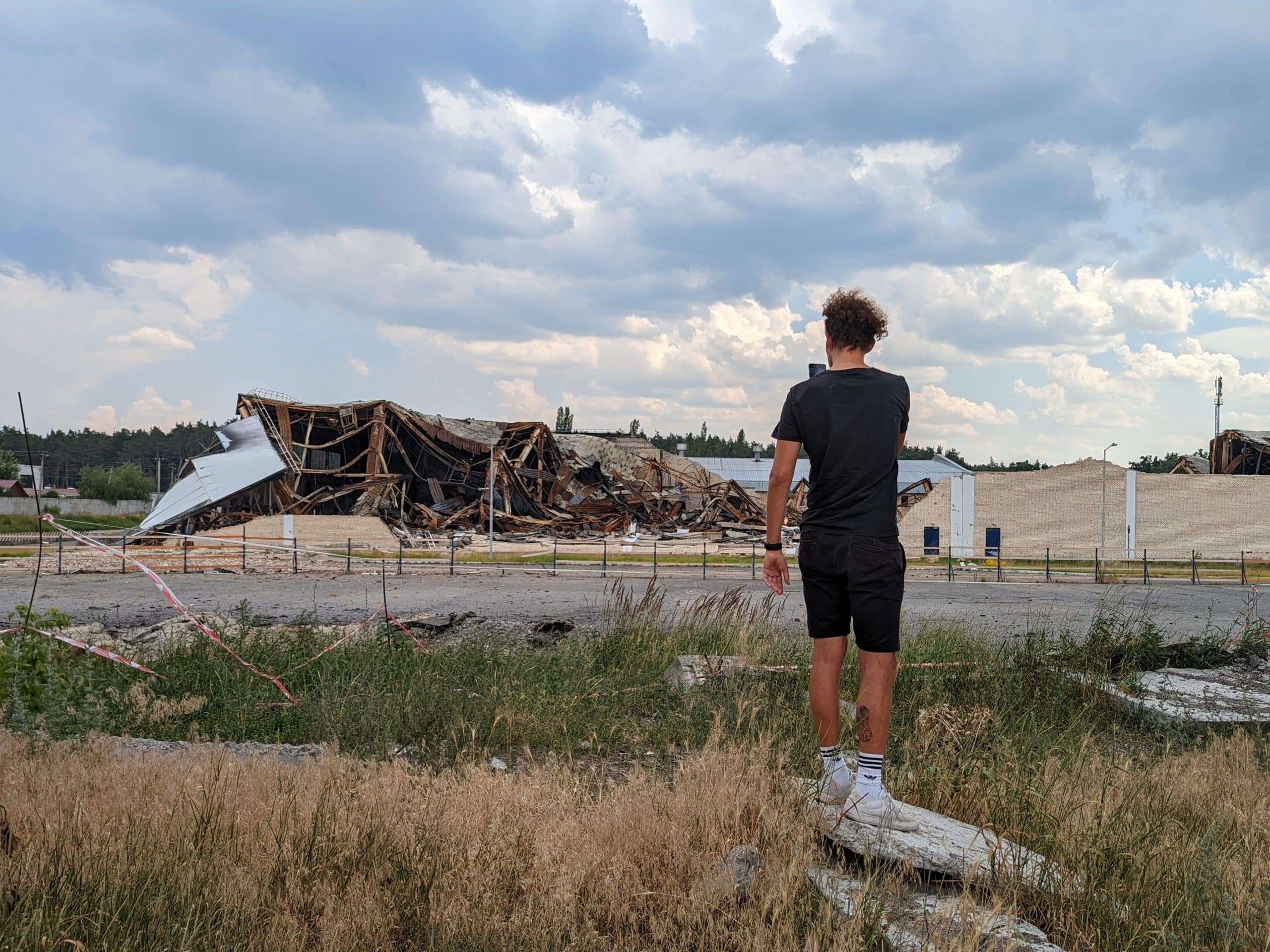 A destroyed warehouse in Hostomel

As you may know, I cycled to Lviv and Ternopil in June in support of Ukraine. Many of my friends and family were worried about my trip to an active warzone. So I promised them to stay in the more safe West of Ukraine, far from the frontline. Unfortunately, or not, I found out it’s possible to take an overnight sleeper train from Lviv to Kyiv. When my friend Svitlana’s brother offered me to drive to Irpin and Bucha, I couldn’t stop my curiosity anymore. I must go to Kyiv!

Sleeper train from Lviv to Kyiv

Normally fast trains are running between Lviv and Kyiv, but not anymore since the start of the war. Because a normal train ride now might take up to 8h, I decided to take the overnight sleeper train. I booked a ticket for Tuesday 28 June, coming back the next day Wednesday 29 June. That way I didn’t have to sleep in Kyiv and had the whole day to explore the city and its surroundings.

The price for the return ticket in a first class coupé was 2800 hryvnia (75 euro). First class coupés have two passengers, while second class coupés have four passengers. The other passenger for my first leg did not show up, so I was lucky to have the whole coupé for myself. Every wagon has their own typical ‘providnytsia’, who’s taking care of the passengers during the ride. The train departed from Lviv at 23h07 and we arrived the next morning at 8h42 in Kyiv.

It felt strange to exit the train station and walk towards the center of Kyiv. Walking along the road didn’t seem very different though. The city was alive and everything seemed to be as normal. Just the vibe was different.. Not sure if it was really the case or mainly something in my head. I made a stop at Bimbo 2 for breakfast, after which I continued walking to the famous Maidan Independence Square.

A few years ago, Maidan was full of tourists, but now it was empty. Just some locals lighting a candle in front of a grass court with Ukrainian flags and a sign showing the number of Ukrainians ‘killed by Putin’. A bit further on the square, the words ‘HELP US’ were formed with sandbags, making it readable from the sky. An officer stood at a checkpoint for cars moving in the direction of the presidential palace. A number of ‘chevaux de frise’ were waiting on the side of road to be quickly deployed when necessary.

On the Mykhailivs’ka Square, a number of captured and destroyed Russian military vehicles were displayed. People were taking pictures, children climbing on the vehicles, a guided group tour walked by. Pretty unreal.

Just a few days before, a missile had hit a residential building not far from the center of Kyiv. I decided to have a look, ordered a Bolt taxi and confirmed the location with the driver, Yevgen. Communicating was not easy, but I understood he’s from Tsjernihiv, not far from the Russian border. A very beautiful and historical city, Yevgen said, but really suffering from the war. Barely moving in a traffic jam, I thanked Yevgen and walked the last part to the targeted building. Unfortunately the roads leading to the building were closed off and I wasn’t allowed to take any pictures from far.

After this unsuccessful mission, Stepan picked me up and we drove to Retroville, a modern shopping mall in the North of Kyiv that was heavily damaged by Russian bombardments. It was impressive to see how fast they are repairing the damage and most of the shopping mall was already open to the public again.

We left Kyiv and continued driving North towards Hostomel, Bucha and Irpin. In Hostomel, Stepan showed me the destroyed warehouse of the company he works for. Further along the road we drove where the front line used to be, with many sandbag constructions, jerseys and even trenches. Understandably I wasn’t allowed to make any recordings in this area.

It started raining heavily when we reached Bucha, which made the view on the destroyed megastore even more sad. The building was totally shattered but the store name “Intersport’ was still readable. In Irpin, the consequences of the war were even more visible. A lot of shops were totally burned down and some residential buildings literally had a hole in the wall from the missiles.

Visiting Kyiv, Bucha and Irpin was an impressive and interesting experience. I couldn’t have imagined going here when I cycled to Ukraine, but I’m so glad I did. The perspective is different from what you read and see in the daily media. Even in the current situation, the Ukrainians repair the damages and try to pick up their life again. But the uncertainty stays, not knowing when and where the next bomb will fall. And even more, what will Ukraine be in the next years.

How I cycled from Belgium to Ukraine during War